The Trials and Tribulations of English – Arabic Translations 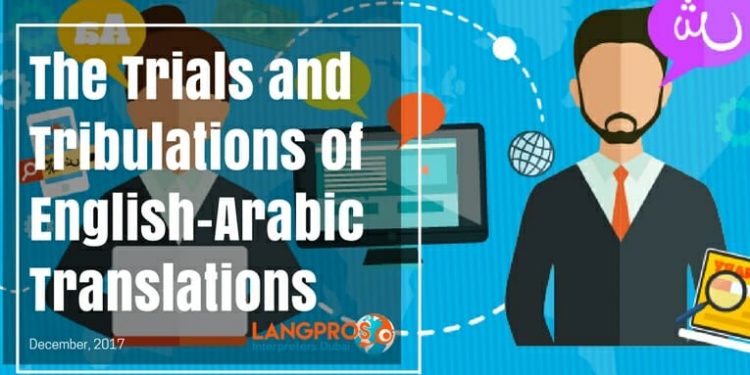 Translating and interpreting from one language into another always has its challenges. Yet the obstacles that arise when translating English into Spanish, French, or any other romance language are no match for those that arise when translating from English to Arabic. This is mostly due to the two languages’ sizable differences in their grammatical structure, collocation, cultural references, and elocution.

The grammatical structure of Arabic and English are extremely different. The first major difference in constructing Arabic from English sentences is that Arabic, like many other languages, is gendered. Nouns are assigned a female or male gender. Their verbs and adjectives in the sentence must also correspond with this gender. Unlike English, Arabic verbs are conjugated for both gender and number. They are conjugated for singular, plural and dual forms. Whereas in English, verbs are conjugated into either singular (he/she/I) or plural (they/we).  Also, Sentences in Arabic tend to be long and flowy. They use lots of descriptive adjectives and will often describe the same noun with four or five similar words. English sentences, on the other hand, are more succinct and less repetitive. In English, the subject of the sentence comes before the verb and the object. This is not always the case in Arabic, where sentences often begin with a verb. The use of passive voice, which is very common in English, is considered grammatically incorrect in Arabic unless the subject is unknown. This means that the English sentence, “the letter was sent by John,” would have to be “John sent the letter” in Arabic. This complex grammatical restructuring can often be taxing for non-professional translators.

Another difficulty that comes with translating and interpreting English into Arabic is collocation or the common grouping of words in a language. Most English phrases cannot be directly translated into Arabic. Many times these phrases have to be explained. For example, the phrase “Secretary of State,” does not make sense in Arabic. It would have to be translated into something more like “Prime Minister” or “Minister”. There are also commonly paired words in each language that aren’t used in the other language. In English, you could describe a person or the weather with the word good. This does not make sense in Arabic. To make sense in Arabic, you would have to use the word beautiful rather than good to describe the weather. Collocation is the most difficult aspect of translation to master. It requires immense cultural knowledge and proficiency in the language.

The need for cultural knowledge in translation and interpreting goes beyond collocation and semantics. There are also concepts that can be difficult to translate due to differences in culture. Some things that can be said in English would be considered insulting to an Arabic speaking audience. Translators and interpreters have to be very culturally aware and able to avoid such situations.

On top of all of these linguistic differences, interpreters also have to manage the difference in elocution. While both languages are phonetic, they have very different sounds. Arabic is much more guttural than English. Adding on to this difference in phonetics is the role of dialects in Arabic. Almost every Arabic speaking country has its own dialect. And though they can be thought of like the difference between British English, American English, and Australian English, in actuality these dialects can vary as much as the romance languages. This means that Egyptian Arabic and Iraqi Arabic are as different to each other as French is to Spanish. This makes producing a translation even harder for an Interpreter, who likely knows Classic Arabic or one or two dialects.

Translating from English to Arabic is no easy task. At Langpros, we have skilled interpreters and translators who are experienced and capable of translating anything.