The Ramifications of Misinterpreting and Mistranslating 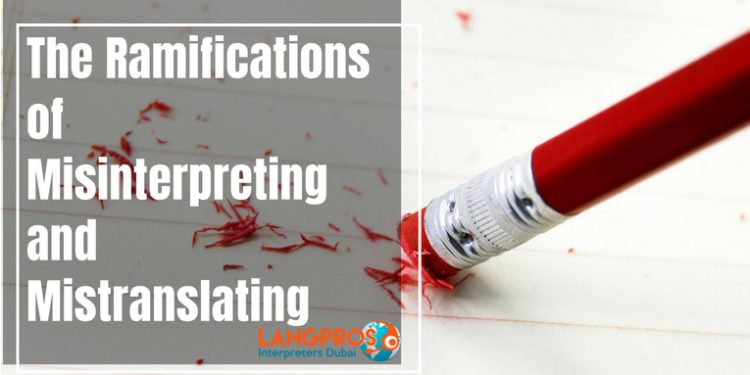 Errors can easily occur in any interpretation or translation. Sometimes these errors can be humorous, but other times they have serious ramifications. Take the mistranslation of Willie Ramirez’s medical state upon his admission to a Florida hospital in 1980. Willie’s friends and family only spoke Spanish. When they explained that the comatose Willie was “intoxicado,” the interpreter translated this into English as intoxicated. “Intoxicado” is actually better translated to English as poisoned. Willie’s family believed he was suffering from food poisoning, but the doctors proceeded to treat Willie based on the interpreter’s translation. They treated him as if he were suffering from drug and alcohol overdose. Due to this procedure, Ramirez became quadriplegic and the hospital had to pay a malpractice settlement of $71 million. Willie, his family and the hospital all suffered because of one misinterpretation.

Many times throughout history, misinterpretations have been the cause of political strife. Sometimes they were simply embarrassing for the politicians. This was the case during President Jimmy Carter’s first visit to Poland in 1977 when the Polish interpreter translated the President’s comment, “I have come to learn your opinions and understand your desires for the future” to “I desire the Poles carnally.” Other times, mistranslations inflamed political relations. In a speech in 1956, Soviet Premier Nikita Khrushchev used a phrase that was translated into English as “we will bury you.” This comment was seen as a direct threat by the United States and heightened the Cold War between the two nations. Unfortunately for both nations, this phrase was mistranslated. Khrushchev had said something more along the lines of “we will outlast you.” Though still not a friendly comment, the statement was not meant to be a direct threat. Had the interpreter properly translated the statement, the Cold War might not have reached the same heightened situation at that time.

Companies have also faced the ramifications of mistranslations and misinterpretations. These mistranslations often give the company a bad image and are costly to fix. In 2009, HSBC had to launch a rebranding campaign after their slogan “Assume Nothing” had been mistranslated to “Do Nothing.” This simple translation error cost HSBC $10 million. Mistranslations in advertising also misbrand the company. When the Ford Motor Company launched a campaign in Belgium, they advertised with the slogan “every car has a high-quality body.” Unfortunately, this slogan was improperly translated to say, “every car has a high-quality corpse.” Confusing the body of a car with the body of a corpse changed the message of Ford’s campaign. Issues like this can often make the company appear culturally insensitive or ignorant. For example, Pepsi faced backlash when they translated their marketing campaign into Chinese. Their slogan, “come alive with the Pepsi generation,” was mistranslated as “Pepsi brings your ancestors back from the grave.” To prevent circumstances like these, companies should use professional interpreters and translators. Companies should also consider using transcreation services to properly adjust their marketing platforms for international audiences.

Mistranslations and Misinterpretations are often caused by over-reliance on machine translations, ignorance of the cultural context or incompetence from the translator. Our team at Langpros are experienced in translating for different contexts and cultures.