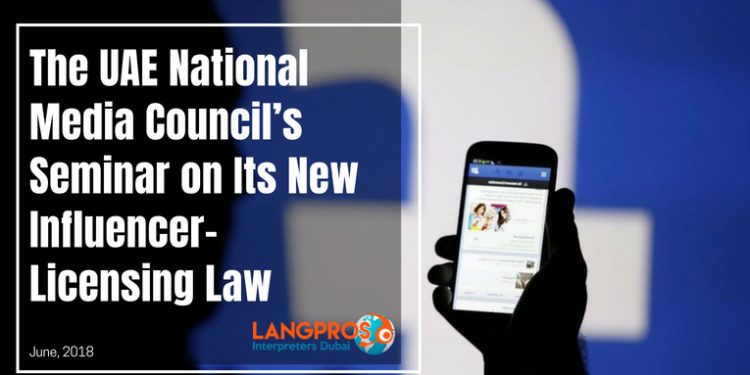 The new law requires UAE influencers to obtain a license in order to run social media campaigns. It is possible to get either an individual license or a partnership license for small groups. Another possibility is to sign up to the sole official influencer agency certified by the UAE National Media Council (NMC), that is Motivate-Vamp.

Motivate-Vamp is a joint venture made up of Motivate Media Group, an organization that provides a wide range of platforms to advertisers in the GCC and MENA regions, and Vamp, a world leading influencer and content marketing platform created in Australia in 2015. Motivate-Vamp owns a license which covers all of its influencers, currently more than 400 in the UAE.

The purpose of the seminar was to highlight the NMC’s willingness to carefully regulate influencers’ behaviour and the use of social media to promote products and, most importantly, to explain the details of the new law in order to dispel any doubts that UAE influencers may have.

Simultaneous interpreting is time-saving since, unlike consecutive interpreting, it does not force a speaker to stop in order to allow an interpreter to translate his or her speech into another language. This type of interpreting requires specific equipment, mainly booths and headsets. For the NMC’s seminar on its new influencer-licensing law, we were in charge of providing the whole equipment, namely a booth and headsets for 40 auditors, as well as professional assistance by one of our specialized technicians.