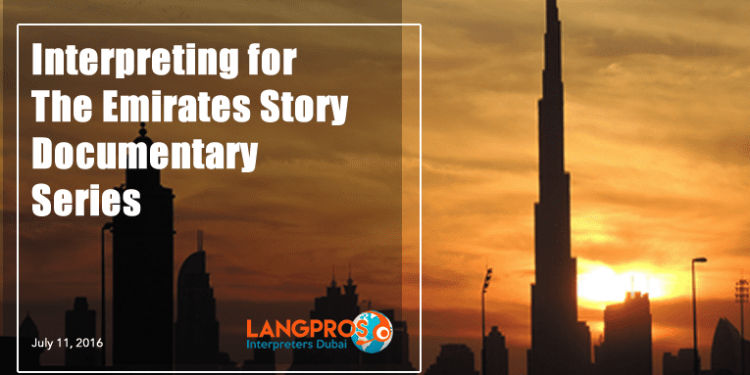 Over the course of a ten-month period, we offered our simultaneous interpreting services to the filming of Atlantic Productions’ five-part documentary series, The Emirates Story. Atlantic Productions specializes in the creation of television programs, theatrical movies, IMAX films, visual effects, CGI and virtual reality experiences. They have won many prestigious television awards including several BAFTAS and ten Emmy awards. Museums around the world use Atlantic Production’s virtual reality experiences and major television channels like the BBC, Chanel 4, PBS, Discovery Channel, National Geographic and France 5 broadcast their illustrious series. The documentary series we assisted with, The Emirates Story, will describe the history and archaeology of the United Arab Emirates highlighting the local culture and environment.

During various filming trips from July 2016 to May 2017, Atlantic Productions used our simultaneous interpreters to translate their interviews with various Emirati locals, archaeologists, historians, museum curators, falconry experts, camel herders and more. Our interpreters travelled with the film crew to various spots throughout the United Arab Emirates. They interpreted for the English crew in the desert of Abu Dhabi, the oasis of Al Ain, the city of Dubai, the mountainous terrain of Ras al-Khaimah, the museums of Fujairah and the archaeological sites of Umm al-Quwain. Surpassing their duties as Arabic to English translators, our interpreters acted as guides and helped with everyday language barriers that the crew faced. Atlantic Productions’ film crew had to capture the essence of the UAE on film in only six visits. To ensure they could accomplish this, we selected our professional interpreters based on their knowledge of the filming areas. They had to be flexible and able to quickly adapt to the needs of their linguistic environment. By having our experienced interpreters for each site, Atlantic Productions was able to optimize their visit and get the most out of their interviews.

The Emirates Story documentary series challenged us to find the best and most flexible interpreters for each film site. While simultaneous interpreting services typically take place in a soundproof booth, we adjusted our typical interpretation style to fit Atlantic Productions’ needs. Our team at LangPros is happy to have helped Atlantic Productions with this exciting project. We look forward to watching The Emirates Story.