Interpreting for the 2017 Globe Soccer Awards 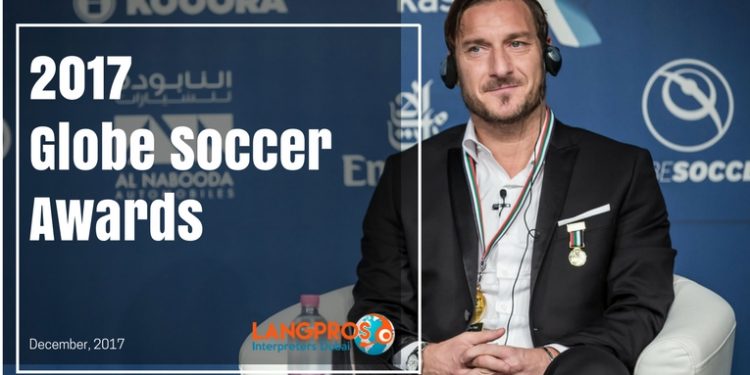 Last December the attention of the football world shifted to the Emirates for one of the most anticipated events in the football calendar: the twelveth edition of the Dubai International Sports Conference.

The Conference, held every year since 2006, is now established as a key platform for discussion on the global development of the game of football bringing together chairmen, directors, referees, agents, players, and coaches at an international level to share their expertise during two days of panel discussions and presentations.

The 2017 edition of the event, organized by the Dubai Sports Council, took place at the Madinat Jumeirah Resort in Dubai on December 27th and 28th, 2017 and ended, as usual, with an official award ceremony attended by the world’s leading football names from all the continents.

The Globe Soccer Awards are meant to celebrate excellence in football, recognizing the role of coaches, players, and people working “behind the scenes” at the highest level.

During the 2017’s edition and for the fifth year in a row, the Language Professionals were selected to provide simultaneous interpreting services for the Italian speakers and leading footballing names.

Other Italian illustrious names such as Fabio Capello, Pierluigi Collina, and Umberto Gandini took part in the panel conferences to discuss the different aspects of modern investments into the international football.

Simultaneous interpreting was the option chosen to guarantee smooth communications between the speakers, the moderators, and the audience.  Our professional interpreters in the booth translated in real-time each intervention, speech, and presentation from Italian to English and vice versa.

All this being said, we at Langpros, are honored to have been part of this major event and to have assisted the speakers not only during their technical discussions but also helping them deliver their thank you speeches acknowledging those who helped them win the prize.

> 14 awards were assigned in different categories

> Cristiano Ronaldo was awarded Best Player of the year

> Zinedine Zidane was awarded Best Coach of the year

> The Awards evening commenced with a live cooking show which saw the best chefs of Dubai deliver a sumptuous and interactive dinner fit for Champions and food lovers, under the captaincy of the Michelin starred Chef Carlo Cracco.