Which Arabic Do You Speak? 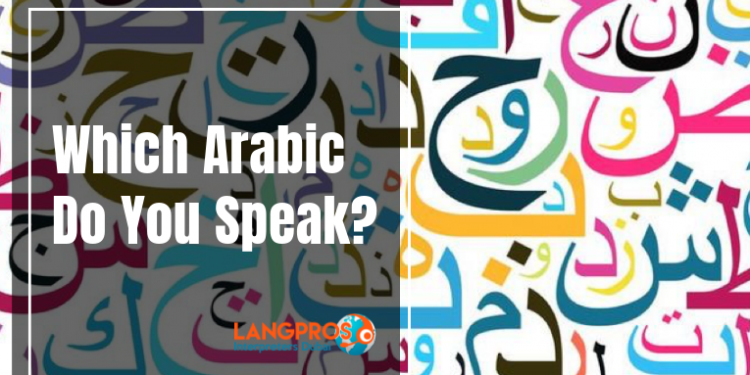 Non-Arabic speakers from around the world often ask the question, “Do you speak Arabic?” While what they should actually be asking is: “Which Arabic do you speak?”

This is because Arabic is more than a single language: it is a macrolanguage comprising 30 varieties, some of which are not even mutually intelligible!

When we talk about Arabic, most of the time we mean the Modern Standard version, derived from 7th to 9th century Classical Arabic. The Classical Arabic is the most prestigious variety, seldom used in everyday life except for religious purposes, as it is the language of the Quran, while the Modern Standard Arabic is the language of formal writing, official speeches, and literature.

Classical and Modern Standard Arabic are very similar, and many Arabic speakers do not perceive them as separate varieties.

Compared to colloquial varieties, Standard Arabic applies stricter rules to the grammar, word order, and phonetics of the language.

The over 30 varieties of Arabic might discourage people fascinated by this language. In fact, its richness and diversity are what makes Arabic so special.

Dialects in Arabic often do not correspond to national borders but were the consequence of historical developments and movements of people that often predate today’s nations.

A great influence on the popularity of some dialects is to be attributed to their prestige and diffusion in cultural products such as TV shows and movies. Egyptian Arabic, for example, is understood by most of the Arabic world because of its mediatic prominence.

Some dialects might not be mutually understandable: for example, speakers of Egyptian Arabic will find difficulty in understanding Maghrebi Arabic, a group of dialects spoken in Morocco, Algeria, Tunisia, Libya, Western Sahara, and Mauritania.

But dialects do not only depend on geography: differences in speech might depend on ethnicity, religion, social classes, age, gender, and speech also varies between the countryside and the city.

It is interesting to note that when communicating with a speaker of a different dialect, Arabs prefer using a higher register of their dialect over switching to Modern Standard Arabic.

At Langpros we collaborate with the best translators, interpreters, and copywriters from all over the Arab world.

The local dialect in Dubai is Gulf Arabic. Nonetheless, we also specialize both in Standard Arabic and in other dialects, and we will make sure to find the right voice for your language project.