“To Meghan Markle” and the Bizarre Art of Verbing 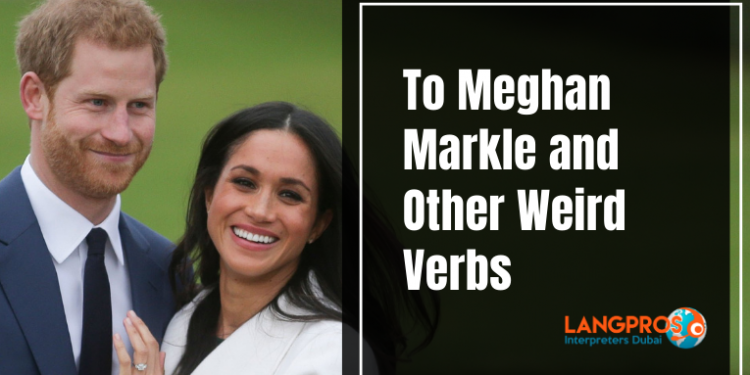 You might not know it yet, but you are verbing more often than not. In fact, you may have come across this article by googling “to Meghan Markle”, two instances of Verbing!

Verbing is the action of using nouns, or other parts of speech, as verbs. In English, it is a well-established way of creating new words and puns which have been used for centuries, such as in Shakespeare’s King Richard the Second when the Duke of York says, “Grace me no grace, and uncle me no uncle”.

As most people know, at the beginning of 2020, Megan Markle withdrew her royal privileges in order to pursue a more independent life with his husband, Prince Harry.

Shortly after the event, “to Meghan Markle” became a verb, roughly meaning “to escape an environment or situation that does not suit your personality or well-being”.

Meghan Markle is far from being the sole protagonist of English verbing. In fact, many brand names have known this phenomenon, such as big IT corporations: “I googled this”, “I’ll facebook that”…

New technologies in history have often known the same destiny: to xerox (to photocopy), to hoover, and many more…

Companies used to fear verbing because they thought it would signify a lack of distinctiveness for their product and the loss of their trademark.

Nowadays, the trend changed and big corporations often invest in their marketing campaigns to promote verbing their products in day-to-day conversations: this is the case for Microsoft and “to bing”.

Being bilingual or amateur translators is not sufficient when approaching verbs such as “to Meghan Markle”.

To fully comprehend and translate in a culturally aware fashion, translators must possess the right training, experience, and cultural awareness.

Langpros’ international network of translators comprises some of the best translators, transcreators and copywriters, operating in over 100 languages.

Our aim is to create a translated text that sounds and reads as native, resonating with the target markets through the use of local cultural items or puns, in order to convey the intent of our clients.

Do you know any weird verbed nouns that we might have left out?