Most Spoken Languages in the UAE 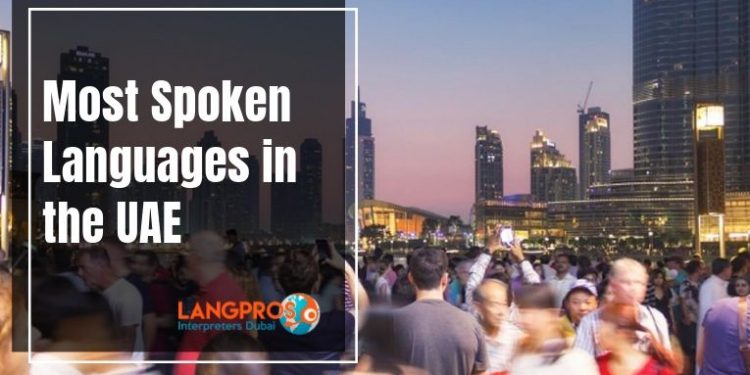 The United Arab Emirates are one of the most diverse countries in the world in terms of culture and language, thanks to their history and their dynamic economy, attracting millions of expats from around the world.

But what are the most common languages spoken in the UAE? Continue reading to find out!

To better understand the mosaic of UAE’s languages, it is useful to take a look at the country’s demography. Native Emirati count for only 13% of the population, while the vast majority of expats comes from South Asia, with more than 50% of the population (including over 2.6 million Indians, 1.2 mils Pakistani, 700.000 Bangladeshi) Other big ethnic groups are the Filipino (over 500.000 expats), Iranians (450.000), and Egyptian (400.000). You can see more numbers and interesting data here.

As far as Europeans are concerned, the biggest group is the British community, with 240.000 residents. Other important groups are the French and the Italians, with around 10.000 community members each.

Despite the great number of non-Arabic speaking residents, the sole official language of the UAE is Standard Arabic. Arabic is used by the Emirati government and it is the chosen language for ceremonies, documents, and books. As far as spoken varieties of Arabic are concerned, the most popular dialect is Gulf Arabic.

Since the vast majority of the population comes from all over the world, the unofficial language of the UAE, and by far the most widespread, is English. The lingua franca is a must if you are willing to work or live in the most populous areas, such as Dubai, Abu Dhabi, or Sharjah, while it is less frequently spoken in smaller villages, where Arabic is still the most popular choice.

Thanks to the big Indian community, Hindi is quite well diffused. The same goes for the languages spoken by other big communities such as Farsi among Iranian immigrants, Urdu for Pakistani, and Tagalog for Filipinos.

In public schools, pupils are taught in Arabic, but many private schools offer education in English, and some also in Hindi.

As a member of the Dubai business community, Langpros is proud to enable multilingual dialogue through translation and interpreting services for government offices, businesses and advertising departments, organizations dealing with the public such as hospitals and airports, and much more.

Businesses in the UAE choose us for the relaunch of their international activities after the COVID-19 crisis. SmartLangPro app, available for PC, smartphone, and tablet (both Android and iOS), gives you access to hundreds of languages within a few taps:

This is the perfect solution for hospitals, airports, hotels, and other organizations dealing with a multilingual public.

Businesses looking to enable their next multilingual webinar or videoconference can choose our Remote Simultaneous Interpreting services, in compliance with the best health&safety practices: