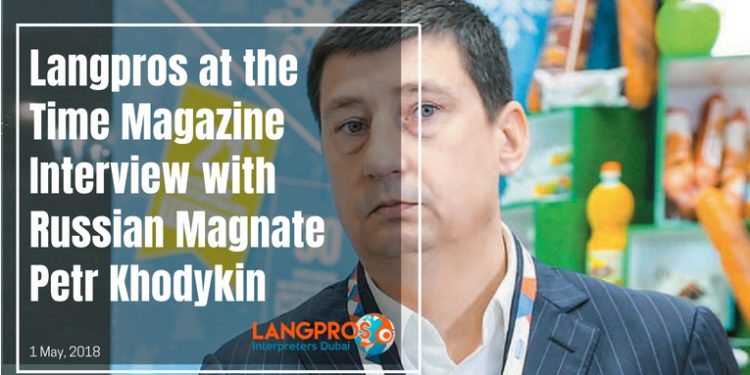 On 1 May the Swiss Tower, located in the modernistic Jumeirah Lake Towers complex in Dubai, hosted Time magazine interview with Russian Magnate Petr Khodykin. This press interview was included in an article about Russian successful enterprises contained in a general section of the magazine.

Khodykin is the owner of Trade House RIF, Russia’s largest grain exporter. This company is a world leader in the purchase and distribution of agricultural goods for the Russian domestic market and for export to neighbouring countries as well as to far-distant countries. It is to be considered one of the fastest developing companies in Russia and it regularly takes part in the most important agricultural events, exhibitions, forums, roundtable discussions with mass media in the world.

During the interview Khodykin was questioned about the company’s most notable projects and achievements in 2017, its growth strategy for the next 3-5 years, as well as about market conditions and how to stand apart from the competition in Russia.

Through this interview, Khodykin aimed to promote his business on Middle Eastern markets, where he would like to open new Trade House RIF’s branches. In order to do so, he has been working hard to improve measures of consumer and business sentiment and to attract large-scale investments from foreign countries.

During the interview we were responsible for consecutive interpreting Russian to English and English to Russian.

We feel honoured to have been chosen for providing linguistic services during such an important interview between an eminent magazine and a world leader in the agricultural field.