Langpros at the Globe Soccer Awards 2019 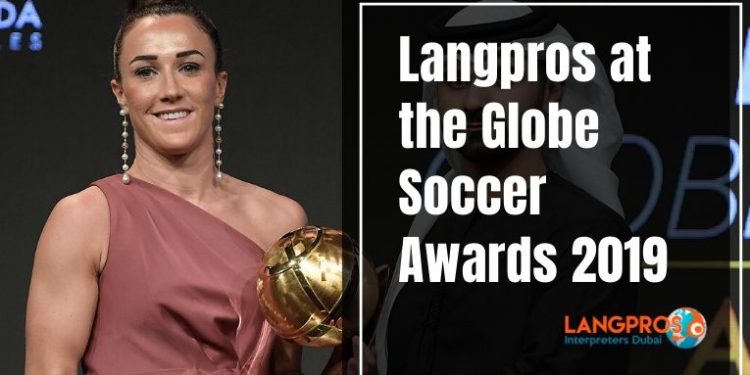 For the fourth time in a row, Globe Soccer chose Langpros- The Language Professionals for interpreting their Awards.

The prestigious event (11th Edition this year) was held in Dubai’s exclusive Madinat Jumeirah Resort on the 29th of December 2019.

The Globe Soccer Awards are a yearly event promoting football and nominating the best players, coaches, and managers of the year.

Dubai welcomed the most influential personalities in the world of international football who discussed many crucial matters in the International Sports Conference.

Like in the past three editions, Langpros had the honor to interpret this high-profile event by offering simultaneous Italian–English translation.

Here is a list of some of this year’s winners:

CR7 achieves this goal for the sixth time, thanks to his outstanding performances in 2019, with 50 games played, 39 scored goals, and 3 titles won.

The Globe Soccer Awards dedicated for the first time this year a title to the best woman in football. This historic prize was achieved by Lucy Bronze thanks to her 4 prizes won in 2019 with her team, Olympique Lyonnais.

These awards celebrate the career of Pjanic, probably the best midfielder in the world today, and Ryan Giggs, who has managed to become the most successful player in the history of English football winning 37 trophies with Manchester United.

Moroccan Abderazak Hamdallah, striker with the Saudi club Al-Nassr FC, won this award after winning the Saudi Professional League with his club as the Top Scorer.

You can find the complete Hall of Fame 2020 on Globe Soccer Award’s website.

Dubai-based Langpros specializes in enabling multilingual events such as the Globe Soccer Awards by providing a vast array of interpreting services such as simultaneous interpreting, business interpreting, and conference interpreting, together with the rental of technical equipment.

Our agency specializes in high-profile events for businesses, such as press conferences, seminars, awards, and much more.