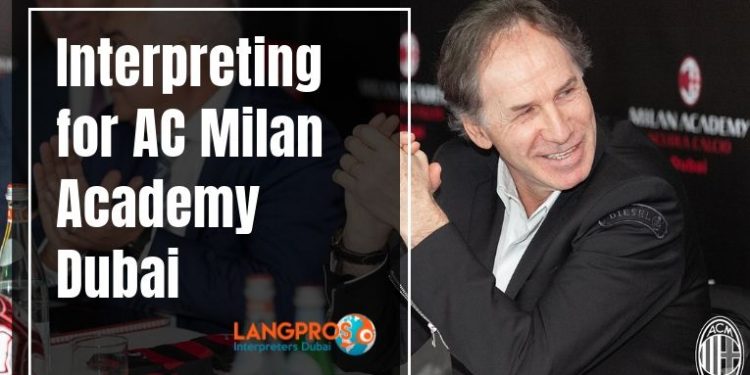 Founded in 2016, AC Milan Academy Dubai offers kids aged between 8 and 14 years old the possibility to train following the AC Milan method. In addition to football techniques, experts teach the kids the basics of healthy nutrition to foster their physical and mental health.

On the 14thof February 2018, the AC Milan Academy organized a press conference to announce the second edition of their Champions Cup, attended by AC Milan historical captain and Italian football legend Franco Baresi. Langpros was chosen to provide Italian-English consecutive interpretation for the event.

The event took place in the luxurious Dubai International Financial District, and more precisely in the award-winning Italian restaurant Roberto’s. Here the red and black club announced the second edition of their AC Milan Academy Dubai Champions Cup, with over 600 boys and girls from 17 academies across Dubai taking part in the competition.

Attending the event was former Italian football player Franco Baresi. Baresi spent his entire career playing with AC Milan, from 1977 until 1997. He also captained the club for 15 seasons. He is considered one of the best defenders of all time, and the World Soccer magazine ranked him as the 19thbest football player of the 20thcentury.

During the conference, Baresi urged the youth to embrace the values of football, and offered his support to families, institutions, and local authorities “in the promotion of the benefits of football and sport as a whole”.

Langpros provided consecutive interpretation services from Italian into English. In consecutive interpretation, after every twenty minutes of speech, the interpreter stops the speaker and translates what has been said. When listening, the interpreter uses specialized note-taking techniques to ensure that every bit of information is carried onto the other language. This interpretation mode does not require technical equipment, but it virtually doubles the duration of the event as speech is repeated twice, and it is usually employed for shorter conferences and meetings.

Langpros interpreters are trained professionals who master the techniques of their trade and are used to working under pressure.

Our agency specializes in interpretation projects for sports events. In the past few years, we worked on several sport-related events, such as the last 4 editions of the Globe Soccer Awards (check our blog posts on the years 2017 and 2019), and for the Asian Cup in 2018.

When interpreting sports events, we make sure to carefully select the right professional linguist with a deep knowledge of the field, alongside perfect language fluency.