How Simultaneous Interpreting Became the Norm 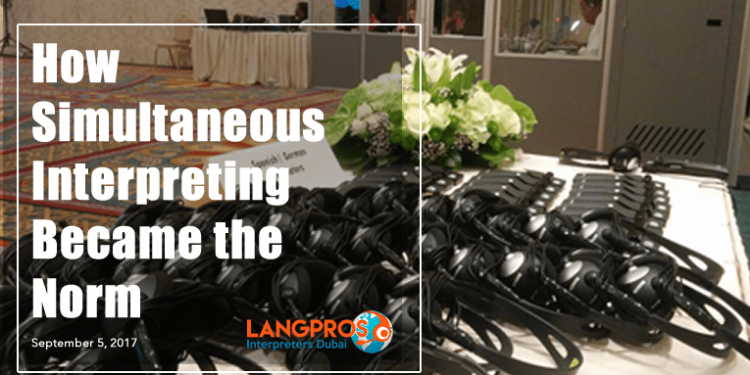 The first use of simultaneous interpretation occurred in the 1920’s after the invention of the IBM Hushaphone Filene-Finley System. Using the Hushaphone, interpreters would sit in a quiet adjoining room from the conference or speech, speaking into a microphone that was connected to headsets in the other room via cables. This system faced backlash due to its technological issues and the hidden nature of the interpreters. High profile speakers dis-liked this system as they feared the interpreters would twist their words when not watched. Meanwhile, their consecutive interpreters expressed concern over being removed from the lime-light that accompanied translating for large audiences.

This all changed with the 1945 Nuremberg Trials. After World War Two, the Allied Powers of the United Kingdom, United States, France, and Russia held a military tribunal to prosecute the leaders of Nazi Germany. But there was one problem, the allied lawyers spoke English, French and Russian, and the defendants spoke German. The trials, already scheduled to take a year, needed a way to translate the proceedings into multiple languages without losing time. The answer, of course, was simultaneous interpreting. Interpreters at the Nuremburg trials worked in teams of twelve. At all times during the proceedings, each language combination would have three interpreters translating in the courtroom, three listening to the procedures, and three researching materials to provide better translations. The lawyers, witnesses, judges and defendants wore cable-connected headsets and could choose which language channel they listened to.

At Langpros, we offer services in whispered interpreting, consecutive interpreting and simultaneous interpreting. All of our interpreters are experienced, skilled, and professionally trained.