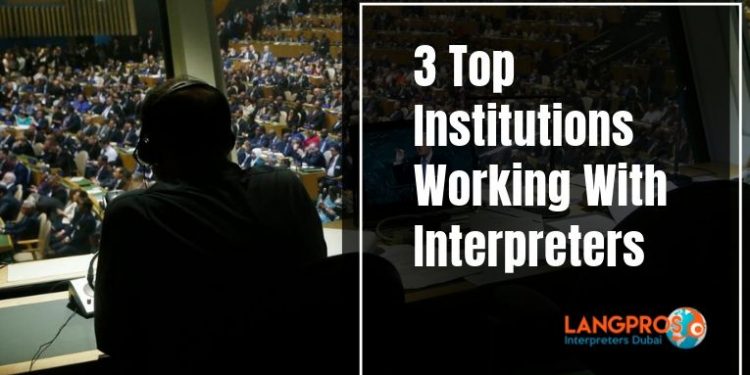 Languages are part of what we are. They shape the way we think and they are soaked in our countries’ cultures. This is why national and international parliaments and assemblies take the issue of multilingual debate very seriously. The European Union, the United Nations, and the Indian Parliament regularly recur to simultaneous interpreters to carry out their day-to-day activities.

But how does it work? Let’s find out!

Working for the United Nations is probably the most prestigious position a simultaneous interpreter can aspire to. First introduced in the late 1940s, simultaneous interpretation is a vital part of the daily work of the UN, enabling intercultural dialogue between the representatives of its members. The United Nations Interpretation Service operates in the various UN Offices, and most notably in the United Nations Headquarters in New York. The interpreting department is divided into six sections: Arabic, Chinese, English, French, Russian, and Spanish.

The Directorate-General for Interpretation is the interpreting services organizer for the activities of the European Union, and with its 11,000 events interpreted every year, it is the largest interpreting organization in the world. With 350 full-time employees and 400 freelancers, it is also the biggest employer of interpreters in the world.

The EU interpreters work from and into the 24 official languages of the Union. During EU Parliament debates, speakers use a microphone connected to the interpreters’ booths, where the speech is simultaneously translated to the members of the parliament through headphones.

The Parliament of India

India is the largest democracy in the world and arguably one of the most linguistically diverse countries around, with 447 languages currently spoken within the country, according to Ethnologue’s latest survey.

After the independence from Britain, Indian adopted Hindi at the official language of the country. Despite that, many Indian MPs do not speak Hindi as their first language, and thus prefer to address issues in their native languages, being simultaneously translated in Hindi and English, thanks to the interpreters working in the two Parliament Chambers.

The rise of simultaneous interpreting allows different cultures to connect without the mediation of a second language, thanks to the sensibility and skills of trained professionals who put accuracy above everything. Langpros offers a vast array of interpreting services, providing the best solution for every type of event. Read more on our services, contact our experts at +971 4 3434753, or write to us at [email protected] to get a free quote!