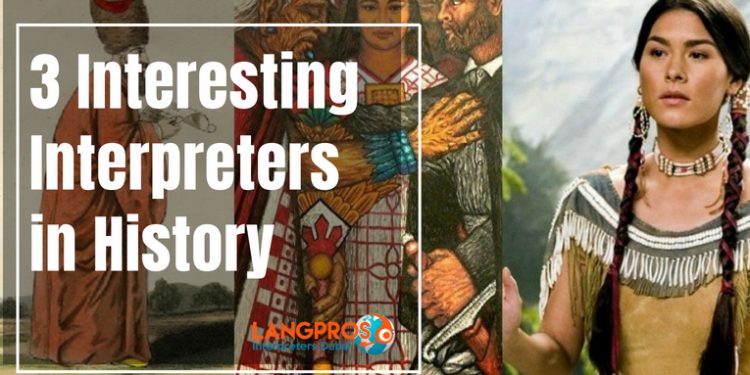 Sacagawea is a Native American woman famous for her role in the Lewis and Clark Expedition. The expedition itself was commissioned by President Thomas Jefferson as mission to explore the new territories of the Louisiana Purchase in 1804. Born as a daughter of a Shoshone chief, Sacagawea was kidnapped by an enemy tribe at the age of 12. She was later sold as a slave and married to Toussaint Charbonneau, a French-Canadian Fur Trader. When the explorers, Lewis and Clark, entered the area in which the couple were living, they hired the pair as relay interpreters. Sacagawea spoke Shoshone and Hidatsa and her husband spoke Hidatsa and French. Proving herself instrumental to the expedition, Sacagawea helped communicate with tribal leaders, and negotiate important trade deals. She is also famous for having given birth during the expedition and then carrying her infant son on her back.

During the Ottoman Empire, Dragomans served as interpreters and translators for diplomatic missions. First used after the fall of Constantinople, they tended to be Muslim converts with knowledge of Greek or Italian and Persian or Turkish. Eventually, Dragomans were all required to be fluent in Arabic, Persian, Turkish, and various European Languages. They served as linguistic intermediaries in diplomatic meetings, settled border disputes, and represented the Sultan on important missions. One of the most famous Dragomans was Ibrahim Bey. Born as a Pole, Ibrahim was taken as a young boy by Ottoman Slave traders. Due to his proficiency in Latin, Italian, German, Polish and Turkish, Ibrahim eventually became the ottoman court’s chief interpreter. He served during many important meetings for the Sultan. He was even sent to speak in Frankfurt for the signing of the Ottoman-Hapsburg treaty in 1562.

Doña Marina is known for her role in the Spanish conquest of the Aztec Empire in Mexico. Given to Hernán Cortés in 1519, she became an interpreter, advisor and lover for the brutal conquistador. She could speak Spanish, Mayan and Nahuatl, the language of the Aztecs. She was a major figure in the conquest of the region, translating every negotiation and meeting for the conquistadores. Nick-named La Malinche for her treasonous acts of aiding the Spanish, Doña Marina has a controversial legacy. She is remembered for being enslaved, betraying her people, mothering the first Mestizo child.