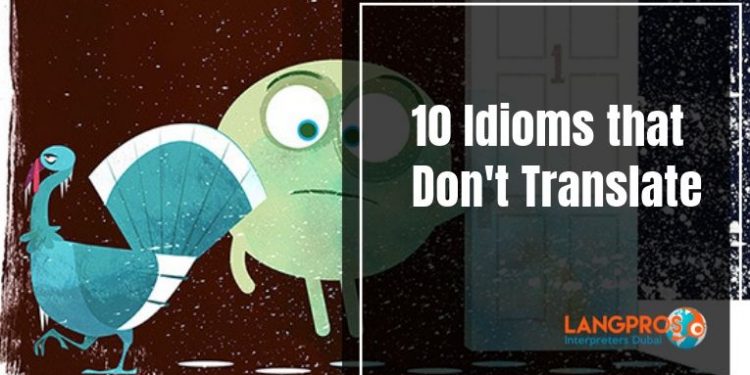 Language is probably the first feature that defines humans. Thousands of different languages are spoken around the world, and each of them describes the world that surrounds us in a slightly different way. This is why we at Langpros love language: because they give us a new perspective on life.

The other side of the coin is that some expressions that have meaning in a certain language are impossible to translate into another without a radical change in imagery or meaning, such as idioms.

Idioms are groups of words that have a figurative meaning, often detached from the literal one.

Here we list ten of our favorite idioms that are impossible to translate:

Meaning: being so busy that you are willing to accept help from anyone.

Meaning: There is no need to worry.

Meaning: Their uneasy conscience betrays itself.

ชาติหน้าตอนบ่ายๆ = “One afternoon in your next reincarnation”

Meaning: It is never going to happen.

Meaning: The situation cannot be changed now, it’s no use crying over spilled milk.

Iets voor een appel en een ei kopen = “Buying something for an apple and an egg.”

Meaning: Buying something for cheap.

Meaning: You have no ear for music.

Meaning: You make the most of what you’ve got.

Meaning: All of a sudden

As you can see, all of these idioms are strictly related to their languages’ culture, tradition, and environment and, when translated literally, they either carry no meaning or the message is heavily modified.

In order to successfully translate idioms, linguists have to focus on the idea behind the message rather than the words. Creative translation or transcreation is the process of rewriting something that can hardly be translated literally into another message, giving it another form, but carrying the same idea.

At Langpros we only work with translators and copywriters who have a sound grasp of cultural items and know how to transfer meaning rather than words.