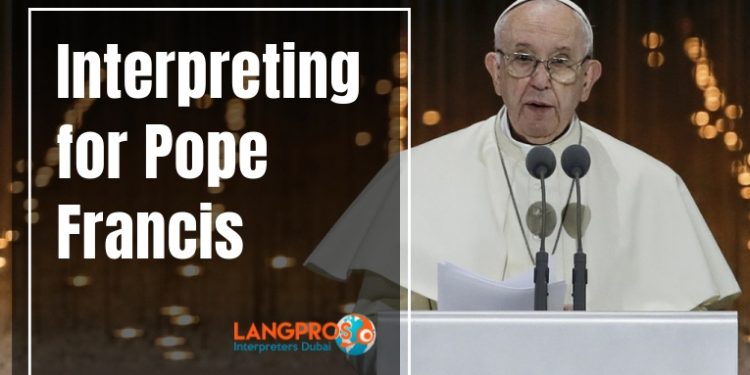 Pope Francis’ historic visit to Abu Dhabi marks an important milestone towards tolerance and peace. For the first time in history, the Head of the Roman Catholic Church visited the Arabian Peninsula. On his three-day visit, from the 3rdto the 5thof February 2019, Pope Francis constructed a dialogue with the most prominent political personalities of the United Arab Emirates, and signed the Human Fraternity Document together with the Grand Imam of Al Azhar Dr Ahmed Al Tayeb.

We can proudly announce we have been part of this historical event.

Langpros was chosen to provide English–Italian simultaneous interpreting services for the Interreligious Meeting, held on the 4thof February at Abu Dhabi’s Founder’s Memorial.

The interreligious meeting was held within the context of the Global Conference of Human Fraternity, which brought to Abu Dhabi hundreds of religious leaders and scholars to discuss interfaith dialogue, religious freedom, the fight against extremism, and the advancement of global peace.

The Pope’s speech addressed important topics such as religious fraternity, dialogue and prayer, the fight against injustice, and the disastrous consequences of conflicts such as those in Yemen, Syria, Iraq, and Libya.

27/08/2019 UPDATE: After the Pope’s visit to the UAE in February, this week the UAE Government announced the implementation of the Document on Human Fraternity for World Peace and Living Together signed by the Head of the Catholic Church and the Grand Imam of Al Azhar, Dr. Ahmed el-Tayyeb:
https://www.arabianbusiness.com/…/426679-pope-francis-hails…

On this occasion Langpros’ GM Matteo Ippoliti told Gulfnews.com about his experience: “As translators and interpreters, we were honored and humbled for having contributed to this historic event which is bringing together different peoples and religions. This is an example of how translation and interpreting can help promote mutual understanding and world peace. We salute the decision by the UAE Government to implement the declaration so rapidly showing the willingness fight division and hatred with concrete positive initiatives for all the people living in a multicultural country such as the UAE”.

On this occasion, we had the greatest honor to provide English-Italian simultaneous interpreting for Pope Francis and the other attendees through a live stream of the event from the interpreters’ booth.

Translating for the Pope has been at the same time a great opportunity and a big challenge, as no room could be left for the smallest mistake or inaccuracy when the eyes (and ears) of the world were pointing at us.

Working at the highest level is what we do best: our team of interpreters is always ready to tackle new challenges and provide excellent delivery, no matter the pressure or the size of the event.

Preparation, a keen eye for detail, and a strong skillset is what enables our team of PMs, interpreters and translators to provide the highest service quality even with short notice.

Visit our website to find out more about our simultaneous interpreting services and rental equipment for conferences, meetings, and more.