Langpros at the Media Launch of The Report Sharjah 2018 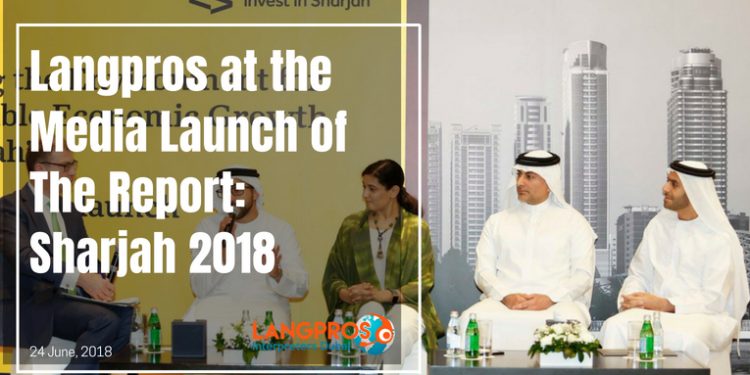 The Sheraton Hotel was the exclusive location of the event, which started with two keynote addresses by Marwan Bin Jassim Al Sarkal, Sharjah Investment and Development Authority’s CEO, and Oliver Cornock, Oxford Business Group’s editor-in-chief. The core of the event was a panel session that saw the participation of some leading representatives of Sharjah institutions. Some important names were H.E Sheikh Fahim bin Sultan Al Qassimi, Sharjah Department of Government Relations’ executive chairman, and Najla Al Midfa, Sharjah Entrepreneurship Center’s chief executive officer. Eventually, there was a Q&A session.

This media launch aimed to develop a plan of action for Sharjah’s economic growth by focusing on its main drivers. According to the report, the main sectors driving the emirate’s growth will be real estate and tourism. As for the first one, the report highlighted a 20% increase in local real estate transactions from 2016 to 2017, a figure that reflects user confidence and stability in this sector. Regarding the latter, tourism makes up around 9% of Sharjah’s GDP and is projected to play a fundamental role in the emirate’s economy in the medium and long term.

Langpros’ Key Role at the Media Launch of The Report: Sharjah 2018

For this event, we were in charge of providing the whole interpreting equipment, namely a booth and headsets for 70 attendees, as well as professional assistance by one of our specialized technicians.

We feel honoured to have allowed effective communication at this event and to have contributed to Sharjah’s economic growth.