Why Are Some Languages Spoken Faster Than Others? 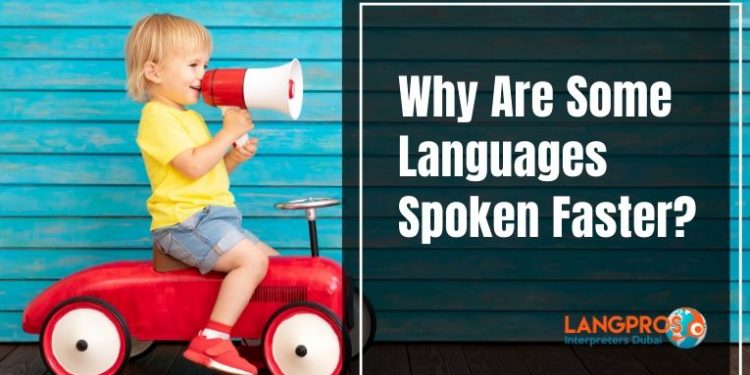 When we travel to a foreign country, or when we hear people speak in a language we do not understand, we might think that the language we are listening to is being uttered particularly fast. While this might sometimes be a misconception, some languages are spoken faster than others on average.

While some languages are faster than others, this does not mean that they are quicker in transferring information. Languages such as Japanese, with a regular alternation of vowels and consonants in syllables, are easier to articulate, but at the same time, they carry information with a lower density. On the other hand, languages with 4 or more tones such as Chinese might be slower, but each syllable is packed with more information. Ultimately, the speed of languages might vary, but the time needed for carrying meaning is roughly the same.

Translations of written texts also present deep differences in length and density of data across languages. The reasons depend on the different grammar and syntax features, but also on the topic of translations. While technical translations tend to be carried across verbatim, literary ones are conveyed more freely and can result in longer texts.

These figures have important repercussions in the translation industry, such as compliance with the design/layout of a brochure or website. But certainly, the most relevant is for the client: always make sure to pay your translation services according to the length of the source text!

Langpros is a language service provider based in Dubai operating worldwide in over 100 languages. Our professional translators and interpreters offer legal, technical, and marketing translations, as well as consecutive and simultaneous interpretation for conferences and business meetings in the United Arab Emirates and the GCC.

We take care of our clients with premium services, fast turnaround, and a fair rate. Contact our office at [email protected] to find out more!

Did you ever think that foreign languages you heard were insanely fast? Let us know in the comments below!