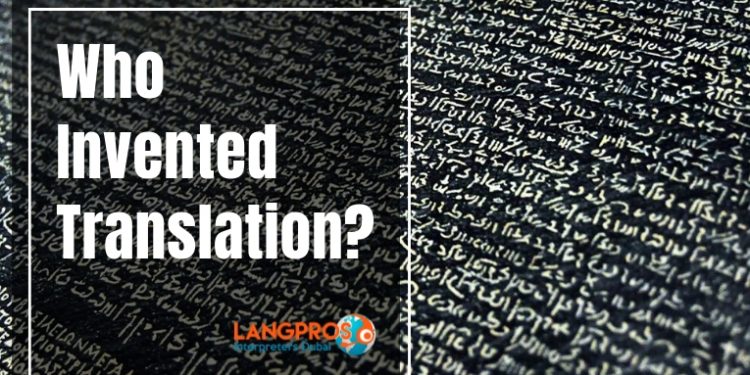 In today’s globalized world, we are constantly exposed to translated text and multilingual environments. But what about the ancient times? What is the origin of translation and its history?

The English word “translation” comes from Latin trans(across) and latus, the past principle of ferre(to bring, to carry). Therefore, the etymology of translation is to “carry across” meaning from one language to another.

But the history of translation foregoes its name.

The most famous example of ancient written translation is the Rosetta Stone.

The Rosetta Stone is a black granodiorite stone inscribed with a decree issued by King of Egypt Ptolemy V in three languages: Ancient Egyptian, Demotic, and Ancient Greek.

Thanks to the rediscovery of the artifact in 1799, scholars were finally able to decipher the majority of the ancient Egyptian hieroglyphics and Demotic writing. Today the Rosetta Stone is displayed at the British Museum in London.

During the middle ages Christianity, Islam, and Buddhism made use of the activity to spread their belief respectively in Europe, the Arab world, and the far East:

Today’s technology made translation far quicker and more affordable. People can look up the meaning of foreign words on Google Translate, or contact language service providers anywhere in the world for professional translation services.

Thanks to a network of more than 2000 translators worldwide Langpros is ready to satisfy every need of the client in over 100 languages. Moreover, we use the best computer-assisted translation software to ensure consistency throughout the text as well as speedy delivery, and competitive rates.