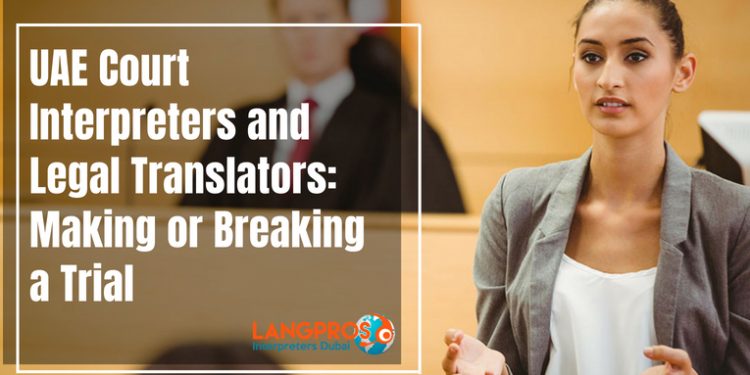 In 2008, a Sharjah Judge adjourned the hearing of an American charged with murder in the UAE after the English-to-Arabic interpreter mistranslated the confession of the defendant. Luckily, the judge was fluent in English and understood that the defendant was pleading guilty to accidentally killing a man, and not to first-degree murder. This small mistranslation could have resulted in additional prison time, or worse. Having a professional interpreter in such cases makes a huge difference.

85% of the population in the UAE is foreign. And while Arabic is the official language and the language of all legal proceedings in the country, many people only speak a combination of English, Bengali, Hindi, Malayalam, Persian, Tagalog, Tamil or Urdu. All trials in the UAE are required to have a linguistic intermediary, otherwise known as a court interpreter, for any non-Arabic speaker. Court interpreters serve an integral role in the UAE’s legal process. They not only provide critical translations for plaintiffs and defendants, but also for judges, lawyers, witnesses, etc.

The task of court interpreters is an important one, they must communicate the message and emotion of their client. They must also ensure their client understands what is going on in the court. This is a critical part of the interpreter’s role. In an Abu Dhabi court case in 2011, a woman confessed to engaging in consensual sexual relations outside of marriage until her interpreter clarified the meaning and allowed her to explain how she was coerced. The interpreter and his translation is what stood between this woman and a mistrial.

At Langpros, we provide professional court interpreting services and legal translation services in the UAE and beyond.  Do not hesitate to contact us for a personalized quote!