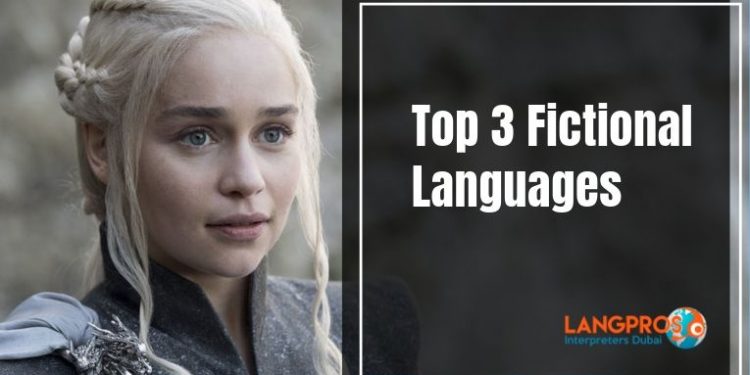 Fictional languages are a particular kind of constructed languages (See our previous post on Esperanto), that have been created as a part of works of fiction such as movies, tv series, books, etc…

Fictional languages are often created by one individual with the purpose to give more depth to a particular culture or group of people within the work of fiction.

Some of these languages are so elaborated that they can actually be learned and spoken similarly to what we do with natural languages. Others prefer to concentrate only on sound and musicality and do not have a functioning grammar.

Continue reading to find out more about our three favorite fictional languages!

“Drogo said I spoke Dothraki like one born to it. It gave him great pride.”

Dothraki is the language spoken by the nomadic, horse-riding tribes of Game of Thrones, and later in the series by the Queen of Dragons Daenerys Targaryen.

The full language makes its first appearance in the HBO tv series, as the books by G.R.R. Martin that inspired the story of GoT only mention a few Dothraki words.

The Dothraki language was created by linguist David J. Peterson, President of the Language Creation Society. The language comprises a vocabulary of over 4000 words, and it is designed to reflect the harsh living conditions of the Dothraki population in the show.

If you want to find out everything about Dothraki, here’s a video of its creator talking about the language’s main features:

“When the Sky People arrived, many Na’vi felt dread.”

The Na’vi language is the fictional language of the Na’vi, the indigenous inhabitants of Pandora, the fictional planet in James Cameron’s movie Avatar (2009).

Cameron contacted University of Southern California’s Linguistics professor Paul Frommer, who created a vocabulary of about 1,000 words by the date of the film’s release and kept expanding it till today’s 2200 words.

Na’vi, like Dothraki, is a fully-fuctioning language, and you can learn its grammar on Frommer’s blog Na’viteri.org.

Unlike Dothraki and Na’vi, “Minionese”, the language spoken by minions in the Despicable Me and Minions franchises, is not a fully developed fictional language, as it does not possess any grammar rule, but rather relies on its sound and musicality for comical effect.

Minionese borrows words and grammatical rules from various languages such as English, French, Spanish, Italian, Chinese, Tagalog, and Russian. The minions are voiced by co-director of the movies Pierre Coffin, whose voice is first recorded and then modified to a higher pitch.

Although we might not specialize in fictional languages yet, Langpros offers a vast array of translation and interpreting services in various fields.

Our linguists always strive to provide the best results in terms of accuracy, confidentiality, and customer satisfaction.