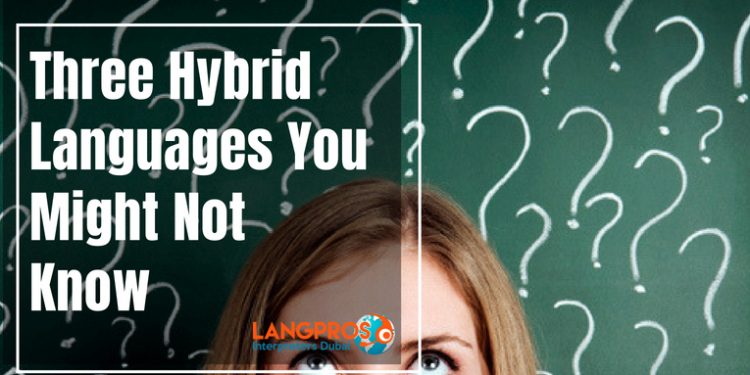 When no natural language is enough to make yourself understood, it is time to immerse yourself in the fascinating world of hybrid languages, i.e. mixtures of two languages sharing lexical, grammatical and syntactical elements. There are hundreds of hybrid languages in the world and here are some famous examples.

It is a hybrid language spoken in border regions between Spain and Portugal, as well as in South America between Brazil and Spanish-speaking countries such as Uruguay and Paraguay. Uruguay, which is to be considered a buffer state between the two dominant nations of Argentina and Brazil, is a good example. The vast majority of its population living in the north, about 260,000 people, speak Portuñol. Some examples of Portuñol are words like “camiáu” (truck) from “camion” in Spanish and “caminhão” in Portuguese. In 2015, a group of artists and academics launched a petition for UNESCO to recognize Portuñol as an intangible cultural heritage of humanity.

Runglish is a language spoken in space! In 2000, NASA listed it as one of the languages ​​spoken between Expedition One’s English-speaking and Russian-speaking crew members on board of the International Space Station. Some examples of Runglish are Слайсающий чиз for sliced ​​cheese and Аисд кофе for cold coffee. Coming back to the Earth, it is still possible to hear Runglish in the Russian community of Brighton Beach in Brooklyn, New York.

This term refers to a hybrid language spoken by Mexican Americans, especially in Southern California. It can also be heard in Panama and Puerto Rico, but no doubt there are differences between the different types of Spanglish, for example Dominicanish (a mixture of Dominican and English), Tex-Mex (Mexican and English) and Cubonix (Cuban and English). Spanglish, which is spoken by about 40 million people (almost as many as the whole population of Spain), includes English verbs with Spanish endings, such as “parquear” (from “to park”) instead of “estacionar”, and “rentar” (from “to rent”) instead of “alquilar”.