The Troubles of Interpreting for President Trump and Illogical Speeches 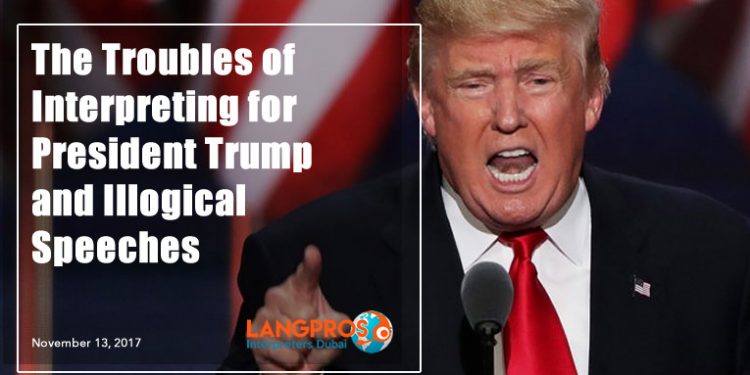 An interpreter’s job is to communicate the message and emotion of the original speaker, but this task is not always easy. Recently, simultaneous interpreters have been struggling to translate United States President Donald Trump’s speeches. President Trump is known for his stream of consciousness communication style, or what has been dubbed as “Trumpese”. He often speaks without clarifying his subject or connecting his thoughts to his previous idea. This illogical presentation makes it difficult to translate his message into other languages. Without a clear subject, interpreters are often forced to guess the topics of the President’s sentences. This is risky because it often leads to mistranslations.

Another issue interpreters are facing is whether or not to make President Trump’s speeches more eloquent. Some interpreters worry that their translations of the President’s speeches are incomprehensible due to the illogical style. Many languages follow stricter grammatical and logical styles than English. In these cases, translating President Trump’s speeches using his style makes the sentences confusing. Interpreters have to decide between translating his ideas or translating his style. For example, when describing Khizr Khan’s wife, Ghazala, at the Democratic National Convention, Trump said, “if you look at his wife, she was standing there, she had nothing to say, she probably maybe she wasn’t allowed to have anything to say…” In languages like Japanese, translating this style exactly does not make sense. Instead, Japan’s public broadcaster, NHK, had to translate around President Trump’s ramblings for their audience. They ended up translating his idea as “She likely wasn’t allowed to give a statement.” Other interpreters translated his sentence as it was, believing that if the speaker doesn’t make sense, the translation cannot make sense. The best interpretations of President Trump are able to balance and communicate both his style and his message.

A good interpretation echoes the sentiment, emotion, style and message of the original speaker. President Trump’s illogical speeches are showing the world just how difficult of a task this can be. Not only are interpreters forced to guess what he is really saying, but they are also forced to choose between making sense and translating exactly what is said. Interpreting, especially simultaneous interpreting, takes great skill. It requires the ability to identify the ideas and purpose behind the message being translated, while still maintaining the style of speech. Not everyone can be an interpreter, but everything can be interpreted.