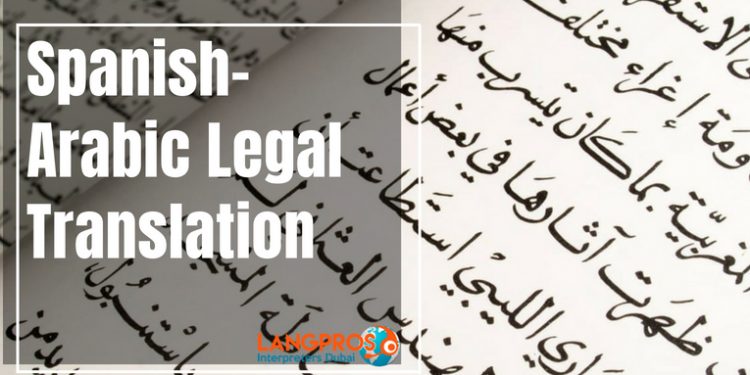 As with other legal translations in the UAE of documents issued abroad, the first step in Spanish-Arabic Legal Translation is getting the Original document attested by the UAE Embassy in the country of Origin. Thus, if the document is from Spain, it should be attested by the UAE Embassy in Madrid. Then, the document, still in its original Spanish, needs to be brought to the UAE, attested and stamped by the Ministry of Foreign Affairs (MOFA).  After this, the original document can be translated into Arabic by a legal translator sworn by the Ministry of Justice.

Arabic to Spanish is a little different as the process depends on the document. For example, with Power of Attorney documents the translation comes first. A sworn Ministry of Justice Legal Translator must translate the document and stamp it. Then, the client has to bring both copies (original and translation) to the Notary Public of the UAE. After this, the client brings both copies to MOFA for stamping. The next step depends on the Embassy of the country the client wishes to use the document in. The Spanish Embassy to the UAE requires the documents to be attested by the Ministry of Justice before they attest the translation. Other embassies do not require this step and will simply attest the translation after it has received MOFA’s stamp.

Our team at the Language Professionals is the only language service provider in the UAE certified by the Ministry of Justice to provide Spanish to Arabic and Arabic to Spanish Legal Translations. We are experienced and familiar with the nuances that accompany this process. We know the requirements of each Spanish speaking Embassy for the Legal Translation of any document.