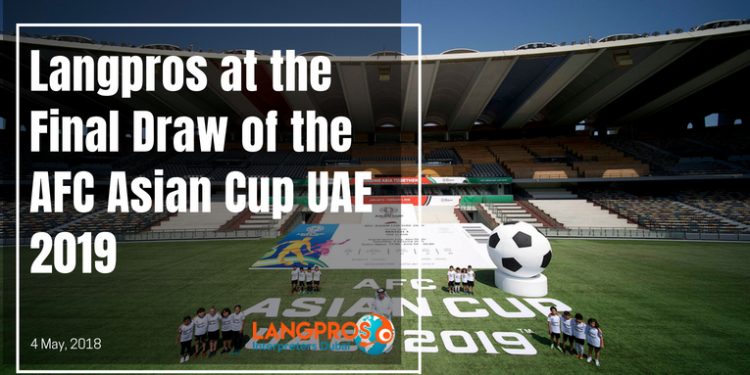 Dubai, 4 May 2018 – The attention of the football world was captured by the final draw of the 2019 AFC Asian Cup, the major football tournament in Asia, which will take place in the United Arab Emirates from 5 January to 1 February 2019. When the UAE first hosted the Asian Cup, in 1996, competing teams were 12. Today, 23 years later, this figure has doubled. In fact, 24 teams will participate in the competition, which aims at “bringing Asia together” – the slogan of the tournament.

The ceremony of the final draw of the 2019 AFC Asian Cup, which was hosted by famous sports broadcaster John Dykes, took place at the Armani Hotel, located in the Burj Khalifa, one of the most iconic skyscrapers in Dubai. The event was streamed live on AFC YouTube channel. The core of the event was the draw itself, which was carried out by AFC General Secretary Dato’ Windsor John together with Iranian legend Ali Daei, Indian team captain Sunil Chhetri, Philippines’ star Phil Younghusband and famed Chinese footballer Sun Jihai. The purpose of the draw was to divide the 24 teams into 6 groups, each one made up of 4 members.

– 51 matches to be played during the tournament

Langpros’ Key Role at the Event

We were pleased to perform simultaneous interpretation services at the Final Draw of the AFC Asian Cup UAE 2019, with two professional interpreters translating speeches English to Arabic in real time. This type of interpretation allows to save time and requires specific equipment, which on this occasion was entirely provided by our company. In particular, during the event a booth and headsets for 500 attendees were needed.

This event has marked our first collaboration with the AFC Asian Cup. We feel privileged to have participated in this major event and hope that this fruitful collaboration will continue in the future.