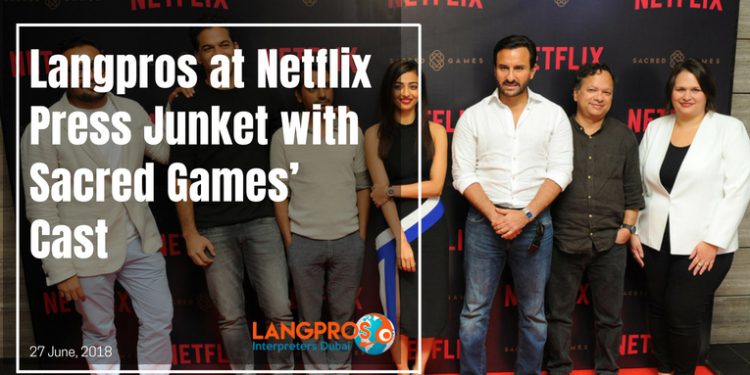 There were four roundtable interviews, each one with one actor or the directors and a group of journalists, then a series of TV interviews for important local channels.

Sacred Games relates the story of Sartaj Singh (Saif Ali Khan), a seasoned and cynical Mumbai police officer. One morning he receives an anonymous call that promises him the opportunity to capture Ganesh Gaitonde (Nawazuddin Siddiqui), a powerful criminal overlord. As stakes raise and Sartaj seeks knowledge of his prey, it becomes clear that the game the two players thought they were engaged in is, in fact, part of a much larger scenario, which expands beyond their city.

The Netflix series is based on the critically acclaimed bestselling novel ‘Sacred Games’ by author Vikram Chandra. The first season, which comprises eight episodes, will be exclusively distributed by Netflix starting from 6 July. The press junket precisely aimed to announce the launch of the series through interviews with cast and directors.

During the press junket, we were responsible for consecutive interpreting Arabic to English and English to Arabic.

The consecutive interpreter was asked to facilitate communication between the local press and actors and producers throughout the interview sessions, translating journalists’ questions and then carefully interpreting the answers of TV series’ protagonists and directors. The interpreter selected for this task is one of our full-time team members, a young and talented professional with significant previous experience in Arabic-English consecutive interpreting for film productions, documentaries, media interviews and press conferences.

We feel honoured to have participated in this major Netflix event and to have contributed to the success of the first Indian production of this world-famous media services provider.

What They Say About Us

“The Arabic translator provided was brilliant, very professional and clear on the requirements.”

(the organizer of this Netflix event)