Langpros at the 2020 Dakar Rally 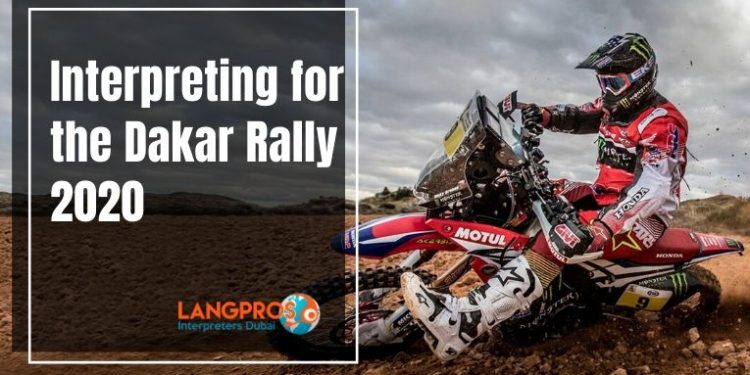 Langpros professional interpreters were proud to provide simultaneous interpreting services for the Dakar 2020 brief from French into English, Spanish and Arabic, diving into the exciting world of off-road competitions.

On the 3rd of January 2020 Langpros was chosen to interpret the Dakar Rally General Briefing at the luxurious Hilton Jeddha. The event, organized by the Saudi Automobile Federation (SAF), welcomed around 2000 people, of which the drivers of the rally, their teams, and the media.

The briefing was held to inform all drivers about the norms and regulations of this year’s event, which also included some changes in the format. The details regarded starting points and hours; safety and emergency measures; the functioning of the new GPS devices; speed limits; end of the day camping instructions; and interesting insight on best behaviors to adopt when crossing nomadic communities in the desert.

The new regulations mainly interested the GPS software, tailored to prevent navigation cheating. In fact, teams are unauthorized to use transmitters or any kind of satellite links of their own unless they have been previously approved. Moreover, the new code obliges drivers to seal away their mobile phones from departure until the end of the stage they’re running -except for bikes and quads.

Another important rule set in last year’s event in Peru prevented the teams to add any additional notes to the roadbook regarding the path, garments or their cars. This norm not only was kept but also reinforced by the fact that competitors only received the roadbook a few hours before departure -for some stages, the day before.

Also, the audience warmly welcomed Spanish Rally pilot and three times Dakar Rally winner Carlos Sainz, who stepped in to greet the teams and announce the new regulations of the competition, ending in wishing everyone a good deal of luck.

If you’ve missed the chance to assist, here are the winners of this year’s Dakar 2020:

Langpros is specialized in providing language services for a smooth-running event. Our solutions include professional interpreting in business and conference settings, as well as the provision of technical equipment and support.