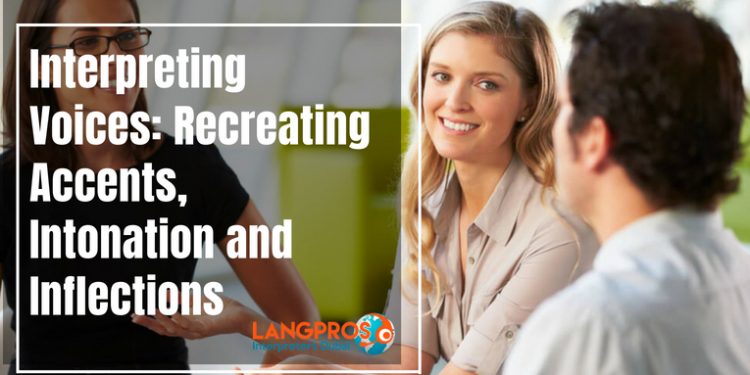 During her visit to Quebec in 1964, Queen Elizabeth II of England delivered a speech in French. The speech was broadcast nationally, but as only 22% of Canadians speak French, it was also simultaneously interpreted into English. Before the speech even ended, the broadcasting company received multiple complaints. The listeners were shocked and unsettled to hear the Queen of England’s words spoken with a Canadian accent!

Although the previous anecdote may seem a little dramatic on the part of the listener, an interpreter always needs to consider the audience’s perception and comprehension. It is not an interpreter’s job to feign an accent, but it is his/her job to recreate the speaker’s intonation, inflection, and voice. If this task is not executed correctly, the audience will not understand the meaning of the original message.

The use of natural intonation in interpreting is incredibly important. An unskilled interpreter will use a staccato interpretation style, this indicates that he/she is more focused on translating the exact words than the message. Meanwhile, an experienced interpreter will focus on translating the message and the meaning. To do this, they must use proper intonation. If the interpreter misses a pause or pauses when they shouldn’t, it can be like putting a full-stop in the middle of the sentence. This not only confuses the audience, but can change the meaning of the comment.

Inflection is another important vocal tool that interpreters must master. In speech, we communicate by varying our volume and tone. If you raise your volume while speaking, you are emphasizing. If you lower your volume, you become more secretive and intimate. If you put emphasis on a particular word, it becomes the focal point of the sentence. We also use inflection to show our attitude and emotions, as well as to indicate  a question. Thus, when a speaker uses a specific inflection, the interpreter must produce the same vocal effect in the target language. The use of inflection is especially important for court interpreters who often serve as the gateway of truth to the judges for defendants and witnesses. Inflection is also very important in simultaneous interpreting as it helps clarify the subject in a sentence.

Interpreters not only adapt the words of the speaker, but also their communication style and voice. When an interpreter is translating, they become the speaker. A skilled interpreter knows this and knows how to make the audience believe it.