Interpreting and Translating at Expo Milan 2015 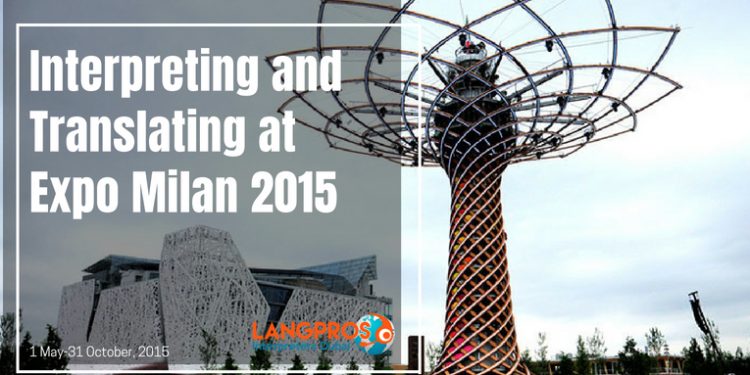 The International Exhibitions Bureau (BIE) chooses one city to host the World Exposition every five years. The most recent World Expo, or what was historically known as the World Fair, was held from May 1st to October 31st of this year in Milan, Italy. The six-month exposition featured pavilions, booths, and displays from over 145 countries. International Organizations, like the European Union and the United Nations, and non-government organizations were also showcased at the event.  With the theme “Feeding the Planet, Energy for Life,” the exposition allowed countries to come together to share their culture, tradition and food. It combined this cultural exchange with creativity and technology, aiming to discover concrete answers for global food security issues. The World Exposition, which under BIE has a legacy of highlighting universal problems, culminated in the signing of the Milan Paper by heads of states and leaders of civil society groups. Expo Milan united countries, using their power to broadcast a global issue.

Expo Milan hosted over 20 million visitors hailing from across the globe. It was the most international Exposition yet and featured speeches from the Secretary-General of the United Nations, Ban Ki-moon; First Lady of the United States of America, Michelle Obama; Chancellor of Germany, Angela Merkel; and other extremely influential global leaders. As a true amalgamation and exchange of cultures, more than 100 languages were spoken around the Expo. Guests attending the 5,000 events at the Expo truly experienced the world through sound and sight. Yet rather than limiting people’s ability to understand each other, the plethora of languages compelled guests to challenge their personal experiences and learn from new cultures. The exchange of languages gave guests a fuller image of each nation’s culture.

All this being said, cultural exchange and understanding could not have been achieved without the help of interpreters and translators. Translators worked to write technical and non-technical food and agricultural terminology in a variety of languages around the exposition. Meanwhile, interpreters provided simultaneous translations of speeches and presentations. Interpreters also accompanied tour groups around the exposition providing consecutive interpretations for the various exhibits and pavilions. Our team at Langpros provided Italian, English, French and Spanish translations and interpretations. We are honored to have been part of this global event and are very much looking forward to Expo 2020 in Dubai!