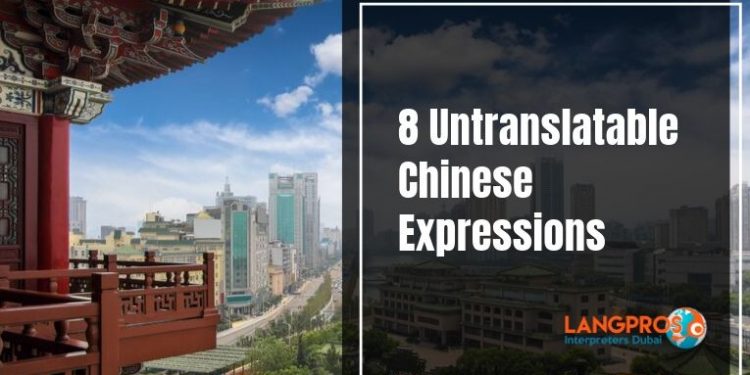 Chinese is a Sino-Tibetan language spoken by nearly 16% of the world population in some of its varieties. China’s millennial culture and heritage is reflected in its languages, filled with many words that do not have an English equivalent.

Here are eight of our favorite Chinese words that cannot be translated directly into English:

This verb literally means “to walk slowly”, but it is only used as a form of greeting meaning “goodbye”. Chinese speakers choose these words when an elderly is leaving their home, to wish them a safe journey without rush.

This word is a polite way to address workers such as taxi driver, barber, construction worker, electrician, etc.

The expression could roughly be translated as “master of the art”, and it is a way to honor the craftsmanship of the addressee.

This expression is a variation of tīng, ‘to listen,’ and marks the intention of the listener to be particularly attentive as a sign of respect to the speaker.

Yuán ​fèn is the particular kind of fate that guides human relationships, or the force that makes two people cross paths in a meaningful way.

The Chinese use this expression when bumping into a known person, or when they meet someone who particularly gets along with them.

This verb is used when acknowledging the hard work of a person, especially when they need to do some extra effort such as work overtime, or when studying for a difficult exam.

This verb is used in traditional Chinese medicine to indicate a person “suffering from excessive internal heat”. This condition and its symptoms, such as acne and rashes, can be cured with a specific diet depending on the season, age, gender, and symptoms.

This expression can be translated either in “act like a spoiled child” or “act coquettishly”. The verb is a codified expression in Taiwanese and Korean drama, where it is often used to describe women speaking with a high pitch and asking men for a favor to get their attention.

Xiāng usually means “fragrant”. However, when it is referred to food, the meaning is much more complex and difficult to translate. The adjective defines an intense, meaty aroma that will make your mouth water!

Translation and Interpreting Services in Chinese

Langpros is a language translation agency based in Dubai and operating in the United Arab Emirates, the GCC, and beyond. Our Chinese translators and interpreters are well experienced professionals that can manage stressful situations and tight deadlines, as well as providing quality content, even when translating words seems impossible!