5 of the Weirdest Movie Title Translations 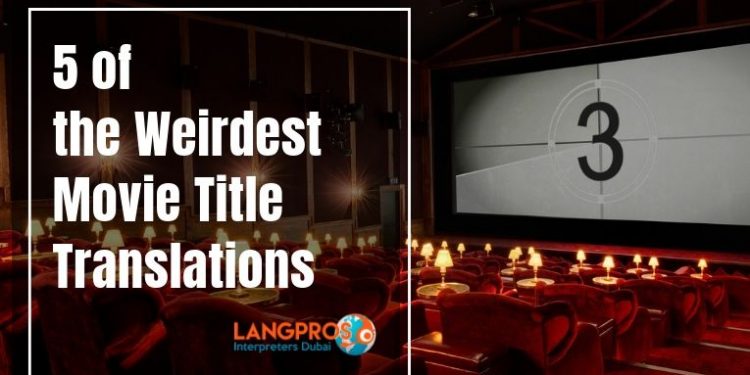 Movie titles play a crucial role in the success and popularity of films. Most movies distributed internationally are produced in English, and then the marketing and localization departments assign new titles to them according to the culture and sensibility of the target market. Translating titles however is not easy, and the wrong choices can compromise the local success of a movie.

Choices in translating a movie title

Movie title translators have the important task of conveying the core message of the movie in a couple of words while keeping the text catchy and inviting the potential audience to choose it. There are mainly three approaches to this type of translation:

Adapting movie titles is a delicate matter, and unfortunately, things can go very wrong, or at least, can be very funny when translated back to English. Here are some of the most hilarious movie titles translation fails:

Well, we hope you already saw the movie, as the Chinese title probably is the biggest spoiler in the history of cinema.

2. “If You Leave Me, I Delete You”- the Italian version of Eternal Sunshine of the Spotless Mind

Probably wanting to recall the popular slapstick comedies performed by Jim Carrey, Italian translators decided to give a catchy title to a drama. The bet didn’t pay off.

3. “The Boy Who Drowned in Chocolate” – Danish edition of Willy Wonka and the Chocolate Factory

Certainly, a figure of speech, but nonetheless creepy, especially for the title of a movie for kids.

A pretty accurate hint about the plot, for sure.

This is certainly not a translation fail but rather a great example of target-culture adaptation. When translated back into English, still, it is even more hilarious and crazy than the original title.

When translating for cinema and television, accuracy is useless without creativity and cultural awareness.

Langpros worked on many projects in the media industry, from subtitling and dubbing to interpreting tasks for tv productions. Our expert linguists will take care of your project, giving it the right appeal to shine in today’s multilingual market.

Our translators are experienced professionals, well aware of the issues of media translation.  Entrusting us with a language project guarantees quality and speedy delivery at a fair price.