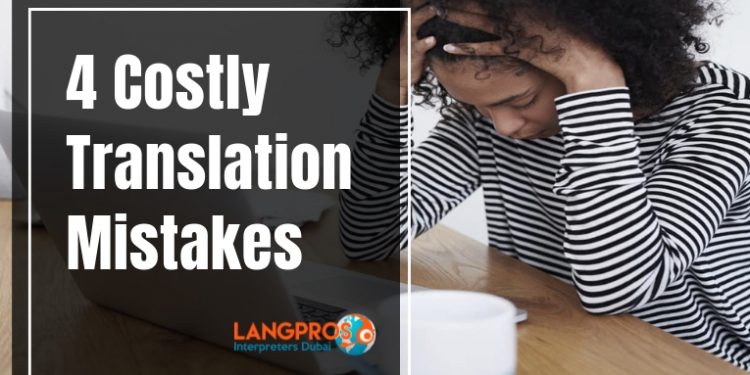 Translation is an art which requires years of study and practice to be mastered. On our blog we often like to publish informative content in order to help those in need of a language service to make an educated choice.

Choosing the wrong interpreter or translator can have disastrous consequences, and the Internet is full of tragic translation mistakes with disastrous financial, reputational, and medical outcomes. Here are four of the most infamous:

In 1980, Willy Ramirez, a Latin-American living in Florida, was brought to the hospital by his Spanish-speaking relatives. When trying to describe his conditions to the physician, the parents used the word “intoxicado”, which was translated as “intoxicated”. In fact, what the relatives tried to communicate was “poisoned”. This translation mistake led the doctors to treat him for drug overdose with dramatic results. Ramirez woke up from his coma as a tetraplegic, and the hospital had to pay him over $71 million to compensate for the malpractice.

Interpreting for politicians is a particularly sensitive task, as conveying the wrong message in translation could have serious consequences on a large scale. In 1957, during The Cold War, USSR President Nikita Khrushchev addressed a speech at the Western Countries ambassadors at the Polish embassy, who were invited by Polish Communist Statesman Władysław Gomułka. Unfortunately, a part of Khrushchev’s speech was translated too literally: what, in context, was meant to say, “we will outlast you”, came out as “we will bury you”. Luckily this speech did not have tragic consequences.

Translating marketing catch phrases goes beyond the perfect knowledge of languages and requires great creativity and awareness of the target market’s cultural context. HSBC bank learned it the hard way: their slogan “Assume Nothing” was mistranslated in many countries as “Do Nothing”, and the company had to launch a $10 million rebranding campaign to make up for the mistake.

Good translation of advertisements and marketing campaigns makes the difference when expanding into new markets. Check out our digital copywriting webpage to make your business thrive on the global market!

In 2004, several staff members from a Hospital in France were sentenced with manslaughter. During the course of 7 years, the staff exposed the patients to a higher dose of radiation because they did not fully understand the instruction booklet (in English) of the radiating machines. 7 patients died due to this translation mistake.

Langpros will handle your language project with care, guaranteeing maximum accuracy and speedy delivery at a fair price.