Looking to the Future: The Power of Language at the World Exposition 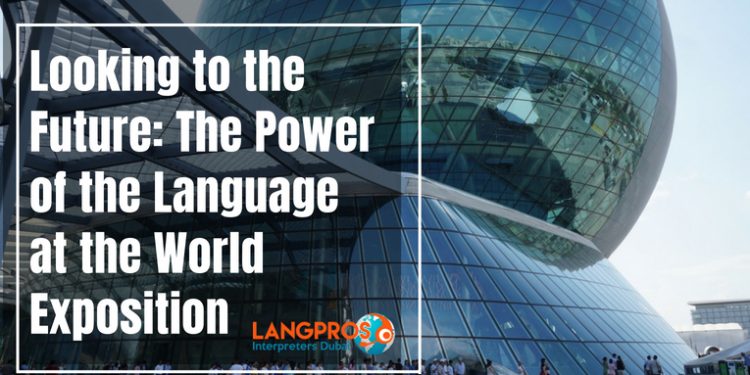 World Expo, or what was once known as the World’s Fair, brings together countries and people from around the world to foster international cooperation. London hosted the first World Exposition in 1851. The fair, which took place in the famous Crystal Palace, drew 6 million visitors to see the industrial innovations of 25 nations. After the International Expositions Bureau (BIE) took over the sanctioning of Expos in 1928, the purpose for these international exhibitions shifted. Countries no longer focused on demonstrating their industrial might, but rather used the Expo as a platform to discuss and cooperate on global issues.

The shift from competition to collaboration also introduced the need for an increased understanding of different cultures, traditions, and languages. This necessity allowed the World Expo to become a place of cultural exchange and education for each nation, organization, and visitor involved. In order for cultures to be exchanged and for the expositions to be truly global, language had to serve as a gateway to understanding rather than a barrier. This meant that host cities had to make the extra effort to translate event information and attractions into various languages. At first, information would only be translated into lingua francas, also known as trade languages or common languages. Over time and with the spread of globalization, World Expositions began to provide translations for more and more languages. At the most recent World Expo, Expo 2015 Milan, teams of translators and interpreters transmitted information and attractions in over 100 languages. Today’s World Expositions are a perfect example of how to use language to transcend barriers and connect people. Language no longer limits Expo visitors, but instead serves as a key to further cultural enrichment and understanding.

BIE has now divided international expositions into three categories: the sixth month World Expo, the three-month Specialised Expo, and the three-month International Horticultural Expo. Expo 2017 Astana, the most recent Specialised Exposition, began on June 10, 2017. The theme for the event is Future Energy: Reducing C02 Emissions, Living Energy Efficient, and Energy for All. Hosted in Kazakhstan, it is the first international exposition in Central Asia. Over 100 nations participated and over 5 million visitors are expected to attend. The next international expo is the Horticultural Expo in Beijing, China. Expo 2019 Beijing’s theme is Live Green, Live Better. It aims to encourage the protection and respect of nature, as well as spread environmental friendliness. From April 29th to October 7th, 2019, the fair should attract over 16 million visitors and 100 country-participants.

Expo 2020 Dubai is set to be the next World Expo. Expo 2020 has already garnered a place in history as it will be the first exposition hosted in the Middle East. This unique geographical location will allow the international exposition to draw more people than ever to the event. In the six-month period, the event is expected to have more than 25 million visitors. The theme, Connecting Minds, Creating the Future, gives the United Arab Emirates and its guest nations the opportunity to foster a global mentality and improve collective development. The design plan includes three zones, one for each sub-theme of Opportunity, Mobility and Sustainability. These three zones will then converge at the Al Wasl central plaza. In Arabic, Al Wasl literally means “the connection.” Thus, the exposition aims to connect global opportunity, mobility and sustainability. One way this connection will be achieved is through language interpretation and translation. We will be assisting Expo 2020 with our interpretation services and translation services.