The benefits of crypto translation

How crypto translation can help your project grow fast 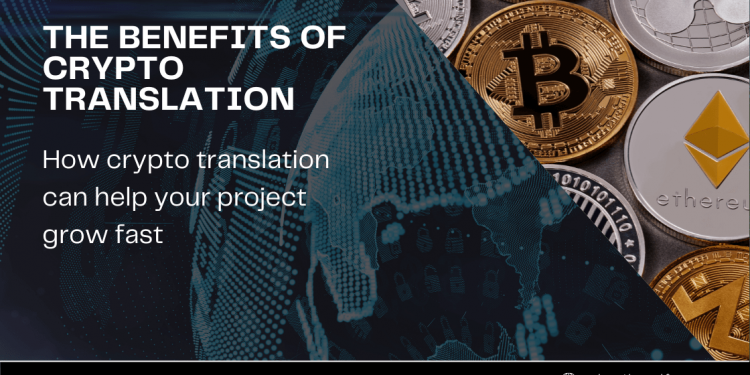 Crypto translations are still a field to be explored and that few have decided to delve into. This is because, in most cases, official documents of blockchain projects, websites, decentralized applications and whatnot are only available in English

However, this only increases the difficulty for the average user to understand some of these concepts. That’s why you should realize the importance and benefits of crypto translation. Below we will briefly look at some of the main pros of this kind of translation.

Those who already know how the world of cryptocurrencies and blockchain works, are well aware of how many complicated terms you may encounter. In fact, technical processes such as Proof-of-Stake, the minting of an NFT, the halving of Bitcoin or the simple creation of a wallet can be even more complicated if you don’t understand the language in which they are written.

In this regard, there are plenty of users who decide not to delve into the subject due to language difficulties when reading websites, apps and official documents. Besides, by translating, you could make the experience of those who already use certain tools even better.

It often happens to make mistakes during the execution of a transaction because the text within an application is not fully understood. Over the years, thousands of users have decided to move their funds and, having selected the wrong blockchain, lost them forever.

This is often the case due to language barriers. In addition, so many decide not to perform particular transactions out of fear of making a mistake, thus limiting the potential of a given decentralized platform.

Imagine that you have to invest money in a project that you do not understand because it is written in a language you do not know. Would you be willing to invest a large amount of money or would you put in small amounts so that you don’t risk too much?

Well, this is the reasoning that a lot of users do before they start using a decentralized protocol. If they don’t read and fully understand important documents like the Whitepaper, it is very unlikely that they will use your platform.

As a result, the level of adoption would definitely be low. Then again, language barriers are one of the main reasons why the crypto world is not yet present in the everyday sphere.

That’s why knowing which documents are important to translate in order to implement a crypto localization strategy could help you make a difference.

We’ve seen some of the benefits of crypto translation that might help you understand how important translation is not only in other industries, but also in the world of blockchain and decentralized finance.

If the terminology is complicated enough, understanding it in an unfamiliar language is even more difficult, especially for the average user who has never used certain tools.

Ethereum’s official documents, for example, are available in about 45 languages, which is one of the reasons why its adoption has reached record levels.