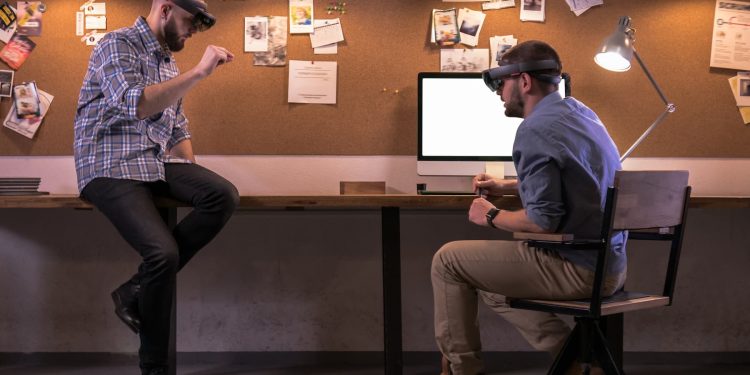 You have certainly heard of HoloLens and augmented reality. These are cutting-edge tools that, by taking advantage of the Windows Mixed Reality system, special lenses, a 3D display and a spatial scanning system, enable users to use applications within a holographic interface.

To put it simply, HoloLens allow to operate just by using your eyes, voice or gesturing, without the need of a physical device to hold in your hand. Today we’re going to talk about HoloLens 2, the version specifically designed to be used in the industrial field.

What does HoloLens 2 consist of?

You should imagine the HoloLens 2 as a compact computer to wear on your head, through which you can touch, pick up and move holograms in a natural way, just like you do with objects. The difference with other headsets is that they are particularly comfortable, designed to be used for several hours of work.

They have an optical display with 2K resolution and holographic density. Logically, there are various 3D optimizations to not strain your eyes.

They also have sensors to track the head and the eyes, combined with 4 visible light and 2 IR cameras, plus 1 MP depth sensors. Accelerometer, gyroscope and magnetometer are features that increase the efficiency of the lenses to move freely.

There is also an 8 MP camera and speakers to better capture the sound of the surrounding environment. The most innovative technologies are, however, the so-called Human Understanding, studied and designed to understand human gesticulation.

Where can I buy these equipment? How much does it cost?

The workplace environments in which augmented reality can be used are numerous. However, developers have designed the HoloLens 2 specifically for: manufacturing, healthcare and education.

In the manufacturing environment, the team leader can immediately assist workers when production is stopped due to a breakdown or mistake. You can also provide detailed guidance on how to use a tool, without having to be physically next to the operator.

In healthcare, the function is very similar. A trained doctor who is operating on a patient can benefit from remote and immediate consultations from another specialized doctor. Workers can compare and test new treatments without having to rely on a mobile device. The patient can also benefit from augmented reality, getting personalized diagnoses and records in the form of a hologram.

Last but not least, students can take advantage of cutting-edge technology for their university projects. Just imagine a student having to submit a web design project to DIDI University.

The result would be a solid project accurately designated to every detail, thanks to spatial visualization tools. Even teachers of disciplines such as anatomy or chemistry can make the educational process easier by showing students concrete examples of each topic.

Regarding the price, this varies according to the HoloLens 2 version you decide to buy. The “basic” ones have a starting price of $3,500, while other versions such as the HoloLens 2 Industrial Edition can go up to $4,950.